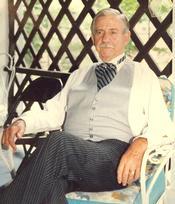 Charles Irwin Crais passed away in Monteagle, Tennessee on July 27 at 94 years of age. Mr. Crais was born in New Orleans, Louisiana, in 1916 to Gustav and Sarah Crais. He was the middle child in a family of nine children. He was preceded in death by his wife of 59 years, Barbara Schnell Crais, his parents, and all eight of his siblings. Mr. Crais is survived by his four daughters: Christie Richard (Bob), Martha Kizer (Jerry), Barbara Symms (Rick Geralds), and Betsy Crais (Mike Wagner), nine grandchildren, and twelve great-grandchildren, as well as a close nephew living in Monteagle, Henry Crais (Nancy). He is also survived by his loving caregivers, Elaine Meeks, Claude Meeks, Cynthia Westerfield, Stephanie Snowden and Betty Johnson. Mr. Crais graduated from Tulane University and was in the first class of mechanical engineers. While at Tulane, he was a member of the boxing and tennis teams. In 1941 he married Barbara Jane Schnell who he met at the Carrolton Presbyterian Church in New Orleans. They lived in Baltimore, Springfield, MA., and New Orleans before settling in Birmingham, Alabama in 1950, where they lived with their four daughters for over fifty years. Mr. Crais owned C.I. Crais Company which was located in Birmingham and he represented several steel mills. In addition to work, Mr. Crais enjoyed buying and selling real estate, flying his airplane, and traveling. While living and working in Birmingham he was involved in expanding and growing the Shades Valley Presbyterian Church where he served as a Deacon and an Elder, as well as serving on many committees. He volunteered at the Fire House Mission for the Homeless and the Botanical Gardens, and was a member of the Rotary and the Vestavia Country Club in Birmingham. When he was a young boy his parents brought him to the Monteagle Sunday School Assembly (MSSA) located in Monteagle, Tennessee. In 1950 he bought the house in which his family summered as a boy and continued the legacy created by his parents for his four daughters. That legacy continues today with his grandchildren and great-grandchildren. He was very instrumental in bringing the Monteagle Sunday School Assembly through some hard times. He worked with the MSSA as a board member, served twice as president, and was elected a life member of the board. Along with Mr. Mel Barnes, Sr., he started the first Fourth of July picnic for the MSSA and attended the "Fiftieth" picnic in 2001. After the death of his wife in 2001, Mr. Crais became a year round resident of the city of Monteagle, Tennessee. There he served on the zoning board for several years and was extremely proud of being personally involved in the building of the downtown park, the walking path, and the Monteagle Town Hall. In addition, he was instrumental in providing expansion to the Monteagle grammar school and the Monteagle Library. He also set up a college scholarship fund for area students (see below) and was a member of the Morton Memorial United Methodist Church. A memorial service for Mr. Crais will be held at the Morton Memorial Methodist Church in Monteagle on August 6th at 10:00 A.M. In lieu of flowers, the family would appreciate donations made to the "Crais Family Community Enrichment Fund", MSSA, P.O. Box 307, Monteagle, Tennessee 37356.
Print