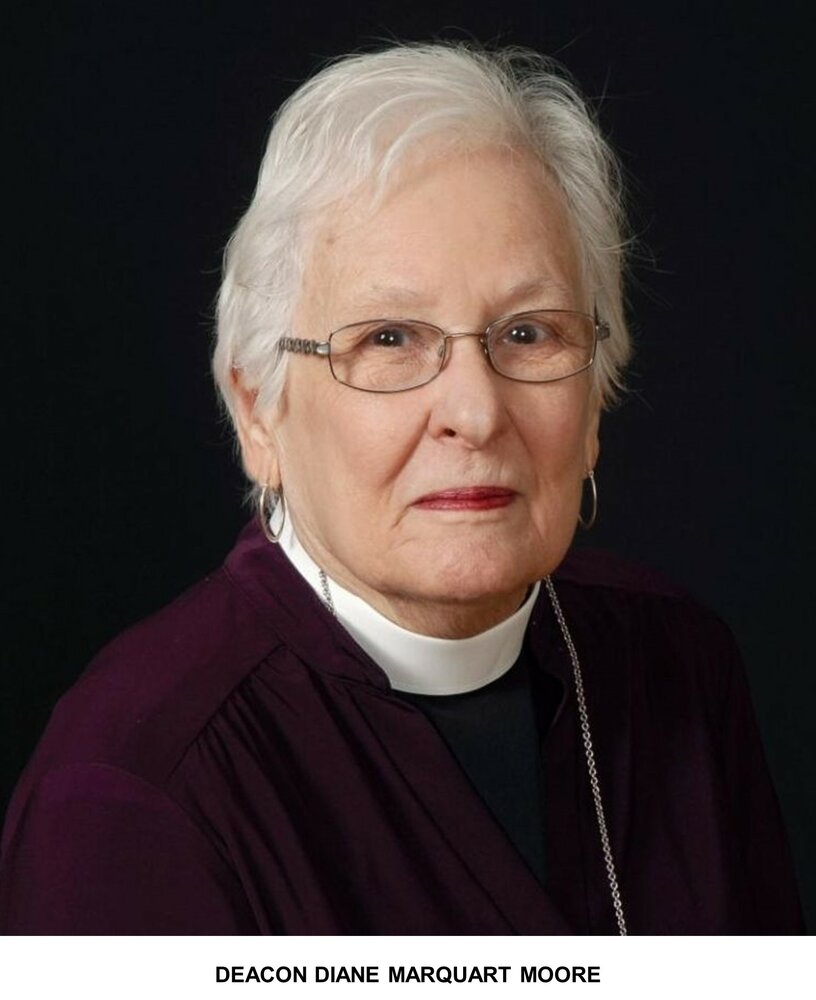 Please share a memory of Diane to include in a keepsake book for family and friends.
View Tribute Book
The Rev. Deacon Diane Marquart Moore died 2 September 2021 at the age of 86 at her second home in Sewanee, Tennessee. She was a native of Franklinton, Louisiana, and had lived in New Iberia for over 50 years. She is survived by her life partner, Dr. Victoria I. Sullivan, her two daughters, Stephanie Romero of New Iberia, Louisiana, and Elizabeth Fontenette of Palmdale, California, grandchildren Martin Romero of Baton Rouge, Louisiana, and Kimberley Fontenette, Joel Fontenette, and Troye Fontenette, Jr of California, and great-grandson Alexander Charles Romero and great-granddaughters Lillian Romero and Kathryn Romero of Baton Rouge, Louisiana, and Kaydence Fontenette of California. She was Archdeacon of the Episcopal Diocese of Western Louisiana, Director of Solomon House Outreach Center Mission in New Iberia, Louisiana, and deacon at the Episcopal Church of the Epiphany, New Iberia. For seven years, she served on the Board of Trustees of the Episcopal Seminary of the Southwest in Austin, Texas, was a member of the Commission on Ministry in the Diocese of Western Louisiana and the Spirituality Commission. She was appointed Director of the Deacon’s Institute of the Bishop’s Centre of Ministry in 2006 (in western Louisiana). Diane was often in demand as a retreat director, speaker, preacher, and taught Adult Education for many years. She was Director of Solomon House in New Iberia for nine years and was especially important in managing delivery of aid to evacuees from New Orleans in the wake of Hurricane Katrina. Diane received the St. George Episcopal Award for distinguished service to youth, including Girl Scouts, Boy Scouts, and other youth agencies. The Lafayette Advertiser featured her as one of 31 women who were changing the history of Acadiana. Diane wrote 52 books, as well as short stories, articles, and poetry. Her poetry and short stories have appeared in several literary journals. She studied with Ernest P. Gaines and with Louisiana Poet Laureate Darrell Bourque. She was awarded First Place in Feature Story Writing by the Louisiana Press Association. Diane was a member of the oldest Fortnightly Literary Club in New Iberia. She served twelve years on the executive staff of Bayou Girl Scout Council in Lafayette, Louisiana. She received the Diversity Award for being a “true visionary in her approach to diversity.” She worked as Public Relations Director for Iberia Parish Library, as Associate Editor of Acadiana Lifestyle magazine, as a feature writer and columnist for the Daily Iberian in New Iberia and contributed to the English version of The Tehran Journal and The Yaddasht Haftegy while living in Ahwaz, Iran. A memorial service will be held on 26 September 2021 at 2 pm the Convent of St. Mary, Sewanee, TN. The funeral service will be held at the Church of the Epiphany, New Iberia, Louisiana, for family and friends on 15 October 2021 at 11 am. Donations in Diane’s honor should be sent to the Convent of St. Mary, 1100 St. Mary’s Lane, Sewanee, TN 37375 where she was an associate.

Share Your Memory of
Diane
Upload Your Memory View All Memories
Be the first to upload a memory!
Share A Memory