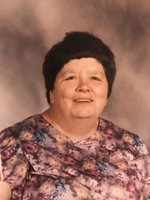 Reba Jo (Bennett) Sartain of Pelham, Tennessee made her journey home on January 11th, 2021. Reba Jo was the daughter of Dave and Almagene (Goodman) Bennett of Monteagle, Tennessee. Reba Jo was born December 17, 1940 in Monteagle. She attended Monteagle Elementary School and Grundy County High School. Like many others, she traveled to Cleveland, Ohio for work. There she met the love of her life, L.D. Sartain, a boy from Pelham, Tennessee. Who would have imagined they both were in each other’s back door, but yet met in Cleveland, Ohio. Soon, L.D. and Reba Jo’s life became one on December 24th 1957. Once married, they returned to Tennessee to make their home in Pelham. They worked side by side to raise a family of six. Reba Jo loved her family deeply and took much pride in doing what was needed for anyone that she could. Reba Jo enjoyed jigsaw puzzles, doing needlework, and especially playing board games. Her most favorite game was “Monopoly” and you could bet she was a master player. Many people enjoyed her homemade pies and fried chicken. She instilled in her family to be kind, respectful and always do your best at whatever you do. Reba Jo was preceded in death by her parents, Dave and Almagene (Goodman) Bennett, sister Nadine Whitfield and brother Darl Bennett, and her husband L.D. Sartain. Survivors are her children Janette Elaine Sartain, James Daniel (Henrietta) Sartain, Michael Andrew (Joyce) Sartain, Mary Kate Sartain, Carolyn Dee Sartain, Billy Mack (Donna) Sartain, brothers Clyde (Teresa) Bennett and Bill (Carol) Bennett. Grandchildren Wesley (Courtney) Sartain, Heather Sartain, and David Alan Winton, great-grandchildren Lucien and Levi and many nieces and nephews. Visitation will be Wednesday, January 13th, from 5:00p.m. to 8:00p.m. at the Cumberland Funeral Home in Monteagle, Tennessee. Funeral services will be conducted on Thursday, January 14th at 1:00 p.m. with Bro. Ray Winton officiating. She will be laid to rest next to her husband, L.D. at the Warren Cemetery in Pelham.